Fatima is an 18-year-old woman from the western region of Sudan. She suffered from obstetric fistula resulting from an obstructed labor at the age of 16.

Since she lives in a nomadic community, she was unable to attend an antenatal clinic and was far away from a health facility when she went into labor. Her mother and aunts reassured her that labor and delivery is a natural, innate process for all females, but when her labor pains started, it was anything but natural.

“After three agonizing days, there was no sign that the delivery was imminent. At that time my husband and my father decided that it was high time to seek medical assistance. I was taken to the nearest hospital (which was about half a day’s travel away) on a camel.” 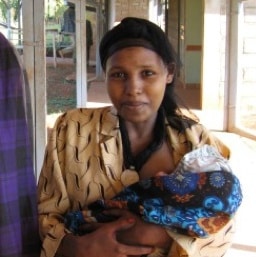 By the time they reached the hospital, the baby was already dead and the doctors performed a Caesarian section to remove the stillborn. Fatima was kept in the hospital for a few days to recover, at which point she noticed that, in addition to not being able to walk due to pain and numbness in her left leg, she was leaking urine continuously.

Her doctor informed her that she had developed an obstetric fistula as a result of the difficult labor and she would need an operation to close the hole between her bladder and birth canal.

Less than a month after returning home, her husband divorced her because he could not stand the smell, leaving Fatima shattered by the loss of her husband and first born. Her parents brought her to Dr. Abbo’s Fistula Center to be treated for her fistula and the pain and weakness in her leg. Fatima received a successful surgery and physiotherapy exercises for her numb leg.

Today, she is completing her rehabilitation at Dr. Abbo’s Fistula Center in Khartoum, Sudan, funded by Fistula Foundation and our partner, Women and Health Alliance International. In addition to the physical rehabilitation exercises to help her leg, Fatima has also gone to psychological rehabilitation sessions to help her overcome her depression and regain her self-confidence and self-esteem. She has also learned income generating activities, such as knitting and baking cakes, through a vocational training program.

When she returns to her community, Fatima will be a healthy, empowered woman, running her own small business and advocating for antenatal care during pregnancy and medical assistance during childbirth to prevent fistulas from occurring to other women in her community. She hopes to remarry and start a family, which will be possible if she follows her doctor’s instructions for pregnancy after fistula operations. She will return to the fistula hospital for a follow up in six months and looks forward to a bright future ahead of her.

Story and photo provided by our partner, WAHA, in July 2013.