I’m going to introduce you to Vavizely in a second. I warn you, her story is fairly difficult to imagine and a little hard to take.

I met Vavizely at Freedom from Fistula’s surgical center in Toamasina, Madagascar. Toamasina is a compact, neat, prosperous coastal town, the commercial capital and main port of Madagascar, and is blessed with a decent medical system.

Toamasina works so well that it doesn’t really make sense that there would be 50 women in this fistula clinic in the middle of town. Isn’t a lack of access to emergency obstetric care a primary cause of fistula?

By boat, trail, or path

It’s only when you get outside of town that you understand the reality for rural Madagascar. The transportation infrastructure quickly devolves into horridly potholed roads, which do not extend to most of the villages where a large portion of Madagascar’s citizens live. (In fairness, the landscape in Madagascar is a nightmare for infrastructure engineering, featuring steep mountains scored by narrow valleys and rivers and streams that cut deep into the country. If that weren’t enough, tropical rains and volcanic soil mean that landslides are a constant threat.)

So you learn quickly that the majority of people in Madagascar live not in neat, compact cities like Toamasina, but in villages that may be reachable by road, but are more likely connected to the outside world by boat, trail, or path, or most likely a combination thereof. For many, the thought of traveling to Toamasina is nearly as challenging as traveling, say, to New York.

“Until I witnessed it—saw the roads, saw the paths heading into the mountains up to countless unseen villages, and, most importantly, spoke with women like Vavizely—I didn’t really understand what these women must overcome if they have any complications during childbirth.”

One of the basic challenges for women in rural Madagascar—like so many places where Fistula Foundation operates—is the difficulty in getting access to quality obstetric care. But until I witnessed it—saw the roads, saw the paths heading into the mountains up to countless unseen villages, and, most importantly, spoke with women like Vavizely—I didn’t really understand what these women must overcome if they have any complications during childbirth.

Vavizely had arrived at the center the day before I’d arrived, and was due to have her surgery in the next few days. She is 24 years old and developed her fistula six years ago when she became pregnant at age 18. She lives in a small village in Mandritsara District, which is connected to the outside world only by a windy, mountainous trail. So, like other women in her village, when Vavizely went into labor she did so without the benefit of any formal medical assistance.

Vavizely’s frame was too small for her baby’s head to pass into the birth canal, and so she endured a labor that went on for a full week. When it became clear that Vavizely’s health was at great risk, several strong family members set out to carry her to the hospital. They set out in the evening, carried her all night, only reaching the nearest hospital the next afternoon.

At the hospital Vavizely discovered that the baby had died and needed to be evacuated. And it was at the hospital, after everything else she’d been through, that she suffered her fistula. Vavizely returned to her village thinking she was the only woman to suffer from the problems associated with fistula. A local elder said she was cursed. Because she leaked urine and feces uncontrollably, she almost never left her house. This is a young woman, and, from the age of 18, she told me she was essentially “waiting to die.”

Hope for a cure

Vavizely found out that she could be cured when a wonderful charitable organization called Mercy Ships came to Toamasina, but their examination of her revealed that her surgical needs were beyond their capabilities. Mercy Ships medical staff told Vavizely that the Freedom from Fistula organization would be opening a dedicated fistula center, where surgeons who specialize in the procedure she needed would be able to help.

Vavizely was shocked to learn that there were other women who had the same problem that she did. Freedom from Fistula is fortunate to have a brilliant surgery team led by Dr. Jeff Wilkinson, who recently arrived in Madagascar to conduct some of the more complex surgeries, including Vavizely’s.

With 50 women on the ward, the Freedom from Fistula center in Toamasina was at capacity on the days I visited, but, rather than turn any of the women away, the center is simply housing them as best they can, bunking up pre-procedure patients with bedrolls under beds.

Fistula Hosp. in #Madagascar had huge # of patients come & didn’t want to turn any away, so they put bedrolls under beds. #FFfieldnotes pic.twitter.com/w0gmQdomfD

They make this choice, in no small part, due to the issue of transportation. Many women make a substantial effort to get to the center, and its staff is simply not willing to turn them away, not even for a few days. So they house them. What I witnessed was a facility that was full, joyful, and supportive. The women who were waiting for their surgeries get some of their best psychological restoration by being around those whose surgeries have just been completed.

The doctors were in the process of drawing up a surgical plan for Vavizely and hoped to have her scheduled in a day or two. As I write this, her surgery has taken place. Thanks in no small part to Fistula Foundation donors, Vavizely is getting a fresh start in her life. When I took this picture, rather than simply asking her to smile, I asked her if she was excited for her turn.

The answer to that question is pretty clear.

I leave you with this. Hung all around the center are pictures of women after they have had their surgeries. They had been asked a simple question when they first arrived, and then again when they were preparing to go back home. I found this breathtaking. 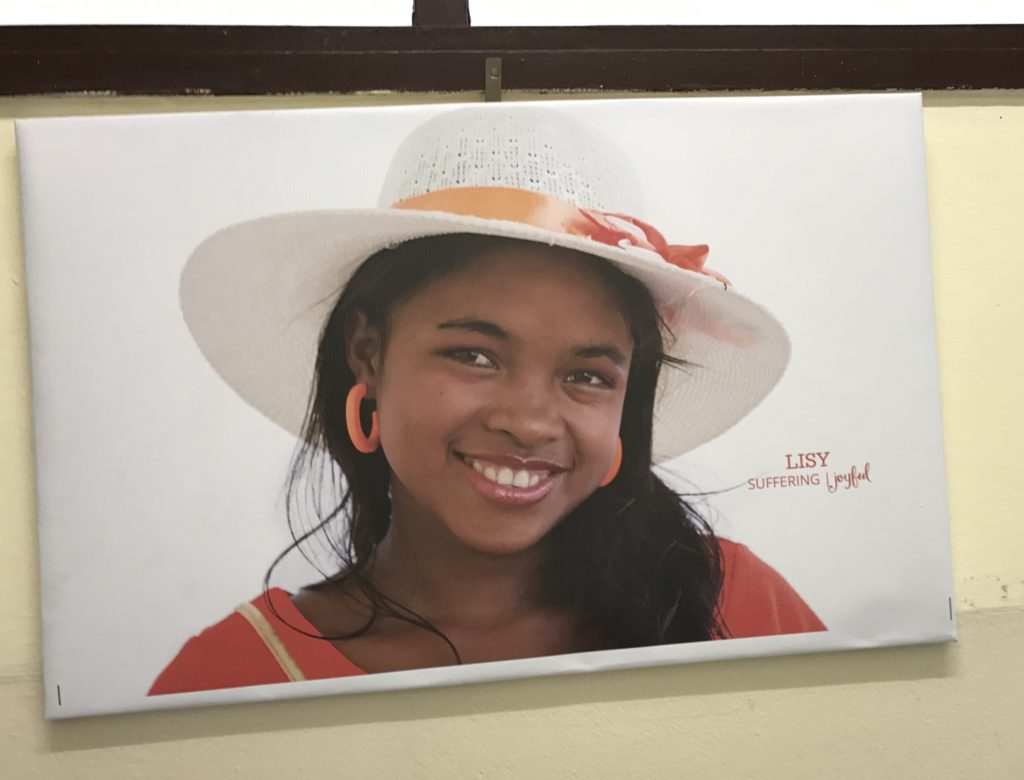 Bill Mann is Fistula Foundation’s board chair. Bill has been passionate about delivering life-changing care to women suffering from obstetric fistula since his first visit to the Addis Ababa Fistula Hospital in 2011. This January, he had a little time to fill, so he booked a plane ticket to visit Fistula Foundation partners in Malawi, Kenya, Madagascar, and Tanzania. See more of his dispatches here.