Lia arrived at CEML with great misgivings – she had sought help at many places for her fistula but was given no hope. A friend told her that she might find help at CEML and urged her to go, which she eventually did. She told staff there that she sat on some rocks nearby, cried and repeated “God help me” over and over before coming through the doors.

Lia was 17 when she married, and soon became pregnant. After a day of labor, her mother-in-law told her not to worry, it would be alright. But the pains the next day were worse. They had not considered the option of going to a clinic because of the danger of traveling during the war – there was intense fighting nearby. After five days of labor, however, they decided it was too much and risked the journey in order to save her life. They had a bicycle, and one man sat in front and one on a back seat and carried her on their shoulders to the nearest clinic. 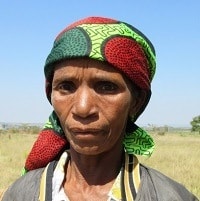 At the clinic, staff members were able to pull a stillborn baby from Lia’s body. Recalling that sad day, Lia said, “I wanted to die too.” After so much damage to her tissues, she was left without any control of her urine. She would change her skirt only to have it soaked again, and had to change several times a day. She could not go to church and sit down because she would leave a puddle.

Many of her family members were killed during the war. It was just Lia and her husband, who did not leave as many husbands do in the case of fistula. They went on to have three more children, all born without difficulties.

Now 49, Lia had lived with incontinence for over 30 years before arriving at CEML. After the operation to repair her fistula, she was finally dry. She could hardly allow herself to believe it. After a week, she whispered to doctors how wonderful it was to sleep in a dry bed. “If I had only known, I would have come sooner,” Lia said. She plans to let other women in the community know that there is hope when it comes to the problems resulting from an obstetric fistula.