This month, I accompanied the WADADIA outreach team to very remote community in Baringo County, located in Kenya’s Rift Valley. Baringo is a hot and arid region, the roads rough and dusty.

Our journey started before 7am and after traveling for over five hours on turbulent terrain we finally reached our destination, a small village called Nasalot, home to approximately 1,600 households. We were absolutely filthy; covered in dust and and sticky from the heat, but arrived just in time for a deluge.

Along with the rain brought mud and flooding roads and complicated the task of finding shelter from which the team could conduct the outreach. After a bit of rearranging, they managed to find a partially covered area and proceeded in spite of the rain, which actually provided some relief to the otherwise stifling heat.

It was market day in Nasalot, a weekly event that brings together all members of the community to buy and sell vegetables, grains, household items, and clothing that are laid out beneath the acacia trees for shelter. Young and old mill around, chatting with each other and occasionally buying some local greens or heaps of ugali (the staple maize porridge) from gigantic sacks.

This community is predominantly Pokot, a tribe known for their traditional culture as well as their stunning beadwork and brightly colored fabrics. Given the isolation of this village and long distance from an urban center, nearly everyone was wearing traditional dress; women heavily adorned with incredible beaded necklaces and large gold hoop earnings, and men wrapped with bright blankets and donning hats and feathers to beautify their appearance. 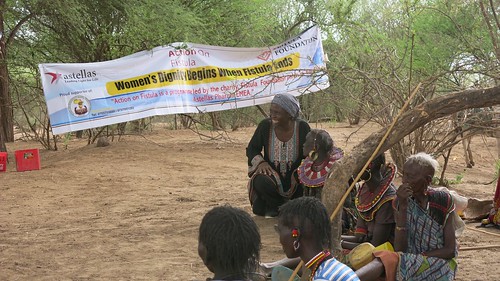 The WADADIA staff and community health workers conducted the outreach in the Pokot dialect, making it essential for the WADADIA team to have a native Pokot speaker, John, leading the discussion.

John sensitized the community on what obstetric fistula is, how it is caused, and the signs of symptoms one might experience if they are living with fistula. He also talked about the availability of free screening and referral through Action on Fistula for anyone who might think they have fistula, or know someone who might. Transport to and from the treatment center is also covered, John explained, as the cost of travel remains such huge barrier in this region.

In just three months in this small community already six women have been referred and treated for fistula, and two additional women were identified during this day’s outreach as likely having fistula, and were subsequently referred to one of our treatment centers.

One of the women who came back to this community after her fistula repair surgery was successful was happy to have the help, but was still shy and suffering from stigma associated with fistula, and so despite our encouragement, decided against addressing the crowd.

However another elderly woman in the group joked and laughed freely with John and said she was going to become an ambassador for this work as she knew some of the younger women who may be living silently with the condition. It will take some time before women start to be comfortable in freely addressing this issue in a context that is so male dominated and women keep to themselves.

When it comes to basic health and human services,  the stark reality is that this community perseveres with very little support from government or charitable organizations. Soft drinks make it out to this small village, yet decent roads, electricity, clean drinking water, and access to basic health services are out of reach.

In Nasalot, virtually no woman will go to deliver her baby in a health facility. In addition to the preference to deliver at home for cultural reasons, the nearest hospital where a woman can deliver is nearly three hours away, and the nearest facility with the capacity to provide a cesarean section in case of complicated labor is nearly 5 hours.

And that distance is measured using a sturdy 4×4 vehicle. Imagine this type of journey using the most available transport—on foot—or on motorbike if one is available, and you are fortunate enough to have saved what would be the equivalent of two months earnings for the ride to the hospital. It is therefore not at all surprising when women prefer to stay at home, and when a complication does occur, they find themselves in a very vulnerable and dangerous situation. This is the context in which women develop obstetric fistula, and it is all too common in rural Kenya and many parts of the developing world.

I am deeply proud of our outreach partners like WADADIA for being committed to reaching communities such as Nasalot and I’m grateful that we have much-needed resources from Astellas Pharma EMEA, which funds our Action on Fistula program here in Kenya, to make this outreach possible.

From this brief trip I was able to see an immense need in these areas, and witness firsthand the very low level of awareness and rampant misperceptions about the condition and stigma associated with it.

There is a lot of work to be done, but I feel confident that through our strong partnerships and a lot of effort, we can begin to make a difference in these communities and bring life-changing care to women living with fistula who never before knew that treatment was available.