Use your voice to support women who have survived the unthinkable.

Esther is a 41-year-old mother of five from the town of Bariadi, in the Simiyu region of Tanzania. In 2017, she experienced a life-changing event. She began suffering from excruciating pain in her stomach and back. Local doctors examined her and determined that she had cervical cancer. Her cancer diagnosis was only the beginning of her health troubles.

Doctors informed her that she would die unless they performed a hysterectomy. But the doctors who conducted the operation made a mistake, and she developed an iatrogenic fistula—a hole, caused by surgical error, that leaves a woman incontinent.

While Fistula Foundation focuses on supporting women who develop obstetric fistula—a hole that forms after prolonged, obstructed labor—we also fund surgeries for women like Esther who suffer from iatrogenic fistula.

During a prolonged labor, a woman experiences contractions that continually push a baby’s head against her pelvis. Soft tissues caught between the baby’s head and her pelvic bone become compressed, restricting the normal flow of blood.

Without adequate blood supply, sections of tissue soon die, leaving a hole—known as a “fistula”—between the woman’s vagina and her bladder or rectum. This hole causes her to become incontinent. If the fistula goes untreated, the woman will uncontrollably leak urine or stool (and sometimes both) for the rest of her life.

Sadly, iatrogenic fistula has become more common in Tanzania and the other countries where we work. As healthcare systems develop and as more providers in remote areas attempt to perform gynecological services, medical errors of this kind occur more frequently.

According to a publication by the United Nations Population Fund’s Campaign to End Fistula, the most common cause of iatrogenic fistula is gynecologic surgery. Abdominal hysterectomies and C-sections are the top two procedures that result in this condition. Distinguishing between iatrogenic and obstetric fistula can sometimes be difficult, but iatrogenic fistulas typically occur “higher up” in the reproductive tract, near the cervix.

Most importantly, iatrogenic fistula can be prevented. Proper training of health providers in obstetric care is critical to limiting the incidence of the condition.

No matter the cause, we believe that no woman should suffer the shame and isolation of fistula. Whether she’s trying to bring a child into the world, or—like Esther—simply trying to survive a cancer diagnosis, she deserves to find support and healing.

After her fistula diagnosis, Esther stayed at the hospital where her hysterectomy was performed. Doctors tried to fix the problem, but they were not properly trained in fistula treatment. The days and nights were long and terrible. She constantly wet her hospital bed. As time ticked on, sanitary pads became too expensive for her to purchase, so she went without that small comfort.

Finally, after three months of turmoil and two failed repairs, doctors referred her to our partner Bugando Medical Center in Mwanza, Tanzania. Esther found hope at Bugando. The highly trained surgeons and staff there were prepared to treat her fistula.

After months of suffering, she was healed!

Before Esther was discharged from Bugando, she told us that she was looking forward to her new future. 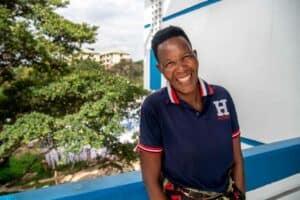 “I will be happy in my heart that I have [been] healed from this problem that has affected me for a long time.”